After seeing the positive feedback on my “Bad Timberwolf” design I thought I would do a little research and see if there had been any kind of 11th doctor pony in the background of the show and if so, Who he was traveling with. I love the Rose storyline in Doctor Who, so when I saw Rose Luck and Doctor Hooves kicking around I KNEW it was up to me to create something for them.

I was able to locate what the MLP Wiki calls “Raggedy Doctor”  Which also points to a shirt at the site We Love Fine, that had three earth ponies labeled IX, X & XI, which was the pony in this design. His companion in the screen shot here….

After some more Twili-style research I found her name was Sea Swirl. It seemed too perfect. A sea, afterall, is just a bigger Pond right? Pond referring to The Doctor’s companion Amy Pond. I wanted to include things I thought were important about Amy, her time as a companion and Rory, the last Centurion. I found it interesting that even though there were some scary monsters lurking in corners the 11th always seemed to have a smile on his face. Since I included “Mad Pony with a box” in Gallifreyan in my first design I wanted to use the language again but felt that “Bowties are cool” felt more fitting this time around. In hindsight I think I should have used “Allon-sy” or another 10-ism in my first design but I digress!

I finished the piece this past Thursday and put it up for sale on my TeePublic site. 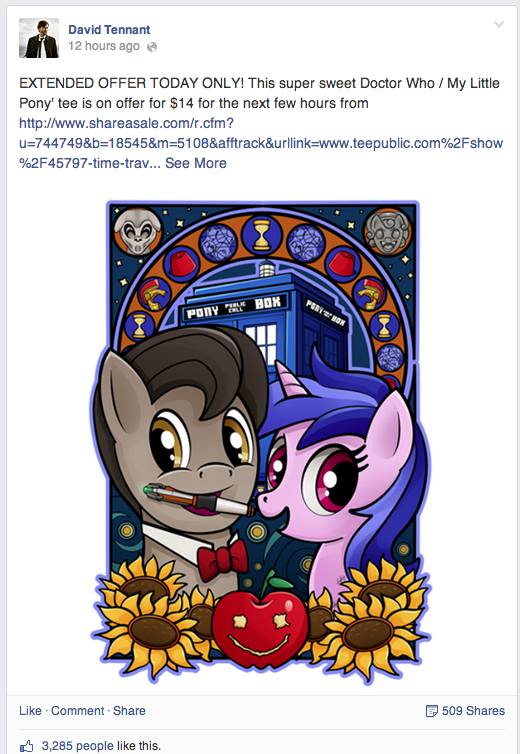 As of right now it has over 3,000 likes and 500 shares!!! I cannot believe they shared my little old design. I literally did a spit take and got water on my computer monitor! I hope they saw “Bad Timberwolf” too, being that is the David Tennant pony after all, with his Rose.

So what an exciting weekend!